My Dog Has A Doppelganger

A few weeks ago while Olivia was at camp Caleb and I spent the day playing with cousins at Grandma Carol's house.  While we were there I got a text from a neighbor saying that Daisy was running around the neighborhood (our dog is kind of an escape artist and more than a few times I have had to chase her down the street barefoot and in my pajamas - so my neighbors know what she looks like.)  I was 100% certain she was in the house when I left, but I had her check the collar anyway and it turned out not to be Daisy.  On my way home that evening I had a few more texts from neighbors saying my dog was loose and running the neighborhood, but I knew she was safe so I forgot about them.  Got home, checked on the dog (yep - still there), let her out to run in the yard and then went about the business of getting Caleb bathed and ready for bed.  A while later I went out to get the dog and there was Daisy... 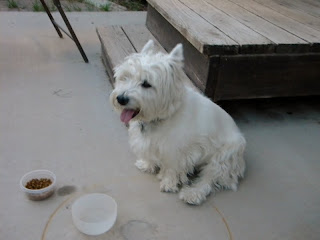 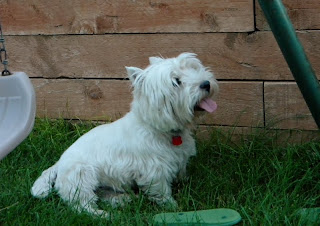 Hello giant double take!  Somehow (I think a helpful neighbor thought he was ours and dumped him over the fence) this little guy ended up in the backyard and by some crazy miracle Daisy hadn't tried to eat him.  (She has a little dog complex like you would not believe and as kind and gentle as she is with people, she goes berserk in the company of other dogs.) 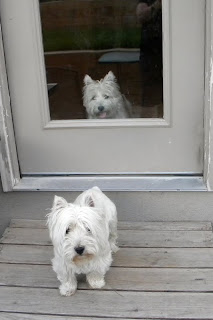 They were so funny together, and had this happened any other day I would have maybe enjoyed it, but for goodness sakes I had a house to clean, bags to pack and four different schedules to coordinate through the weekend so that we could leave out of town for Cameron's bike race the next day and I couldn't decide whether to laugh or to cry! 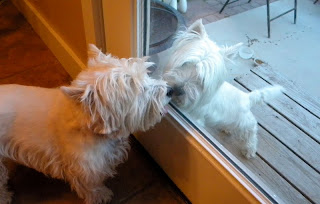 I threw both dogs on a leash, Caleb back into his clothes and we headed out on a little wild goose chase trying to track down the other family in the neighbor who we knew owned a westie (it wasn't theirs), tried to get a hold of the Riverton City animal control (the dog had a city tag but no other identification), left a message and finally gave up for the night. 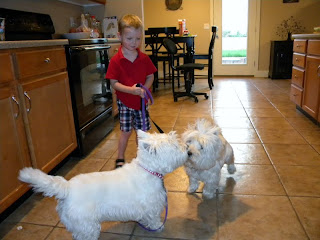 I couldn't believe how much they looked alike!  While we were walking around the block Caleb kept turning to me and saying "which one is ours again mom?" 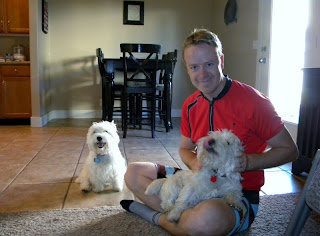 This guy of course fell completely in love with Daisy's look-a-like.
"Emily what if we..."
"No!"
"But if we don't find..."
"No!"
"Well how about if we...."
"NO!"
So long story short, Daisy and her new little buddy had a doggie sleepover before I was able to get a hold of Riverton City and then the owners the next morning, just an hour and a half before we ran out the door to go out of town.
Posted by BensonFam at 2:20 PM

That is too funny!!