For the last nine months Olivia has been involved in a little children's theater group called "Up With Kids."  They meet at the local dance studio every Friday afternoon for an hour and play acting games, learn songs and dances, did monologues and "auditions" and were assigned parts for their play.  This last week they performed their variation of "Alice in Wonderland" (I say variation because it somehow incorporated music from Glee, scenes from "Toy Story" and "Cinderella", as well as the basic story line from the 2010 movie version of Alice in Wonderland.)  Olivia was cast as "Pillbox" (a guest at the tea party) as well as one of the princesses and one of the army of "tweedles."  And she did great!!  She's never been one to seek attention, or even like to speak in front of people or be put on the spot, but she loved every second of this experience and I can see how much she's grown and how much confidence she's gained this last year from being involved in this group. 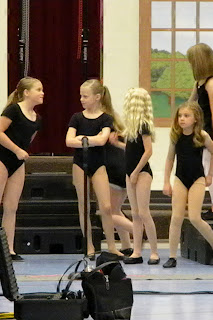 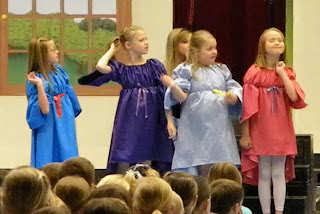 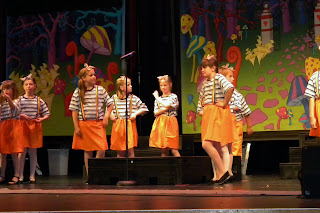 A tweedle (center back with her arms crossed) 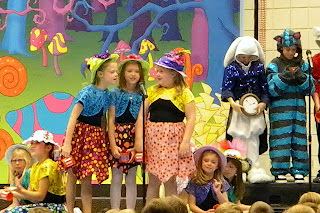 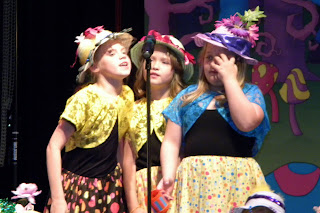 Pillbox saying her lines
(with much enthusiasm and character I must say!) 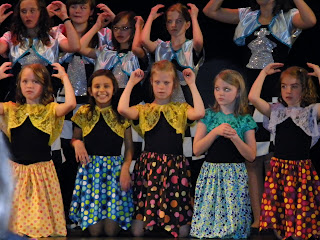 The whole theme of the show was about having dreams and imagination.  At the end of the show, after their bows, they all sang and did the sign language to John Lennon's "Imagine" and it was awesome to see!  (I didn't get weepy at all...  nope, not one little bit....) 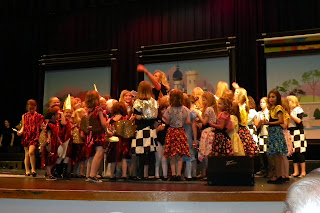 A cast hug for Miss Stephanie their amazing director (this woman has the patience of a saint and is so encouraging and FUN!) 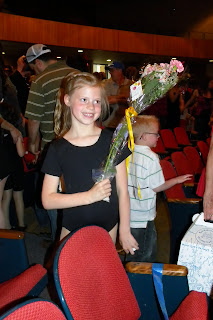 The whole family came to support at her Saturday show and she was so glad to have everyone!
Love you Miss Olivia!  I am so proud of you and how hard you worked and how brave you were!
Posted by BensonFam at 10:06 AM

Way to go Olivia!! I can't believe how grown up she is. Can't she still just be the little girl running around with a Binky in her mouth?!

Good job Olivia! Looks like you did a great job. What a fun program to be a part of.

I loved being in plays when I was young, hopefully she keeps enjoying it.