Late this afternoon one of Livvy's little friends slammed the back door, not realizing Caleb was right at his heels. I ran into the kitchen to find Caleb bawling with his thumb stuck in the closed door. When I opened the door and got his hand out the top of his thumb was squished flat, the nail was halfway lifted from the bottom and there was blood everywhere. I wrapped him in a dish towel, grabbed our church bag (because I figured we were in for a three hour ER visit), chucked the kids in the car and headed over to the brand new Riverton hospital just down the street.
Lucky us - they have an instacare Kids Care just for children and the place was virtually deserted. The MA, nurse and doctor were all amazing! We walked right in, they served the kids otter pops while they took Caleb's stats and then immediately got down to work.
There were lots of numbing shots and then they removed the nail, stitched up the big cut underneath, took x-rays, found a fracture, put his thumb in a splint, gave us pain and antibiotic prescriptions and sent us on our way. It took a little over an hour and Caleb was a trooper and a half. Every time he'd catch sight of the blood he'd lose it all over again, sobbing onto my shoulder. But he held still the whole time and once the bandage was on, and he couldn't see the gore anymore, he cheered right up and left the hospital growling like a dog and skipping on the colored tile.
My poor little man!!!
He doesn't seem too bothered by the splint and I think he's still numbed up and not in any pain right now, but I have a feeling once the numbness is gone he is going to be in a world of hurt and the brace is going to start driving him nuts. I have to change the dressing two times a day, we're seeing an orthopedist in a week and the brace will probably be on for two weeks. How do you explain all of that to a two year old? And I can't wait for the meltdown that will take place every time I remove the bandage and he sees the yuckiness underneath.
Just as a sidenote: my dream of going to nursing school once the kids are older has efficiently been smashed. During phase 1 (lots of needles and removing the nail) I came within an inch of passing out. I broke out in a cold sweat, couldn't focus my eyes, and the nurse had to lay me down in the chair and run for water.
Lovely. And embarassing.
Anyway - that's the fabulous start we've had to our week. Wish me luck with the Caleb man over the next few weeks. 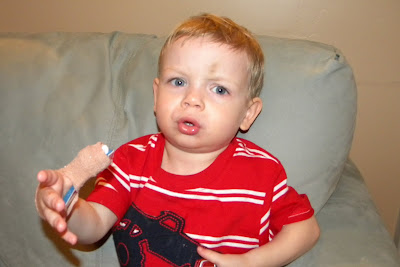 Posted by BensonFam at 7:32 PM

oh no!!! At least your back was feeling a little better...so sorry, I hope he handles it okay! I'd offer to help, but...:) Let me know if there is anything I might be able to do. haha.

Oh I am so sorry! The poor little man. I hope he doesn't give you too much trouble with changing the bandages! I had to laugh at the fact that you almost passed out! I agree that maybe nursing school isn't for you!

Oh Em, poor little guy! I hope your week goes ok. I am with you on the whole passing out thing infact I pro. would of. I can't handle things like that very well at all.

Poor little guy :( Those stories are so hard to read. Good luck!

Oh, and sorry about your nursing dream.

Oh, my goodness. Poor guy, that sounds like it was so painful. I wouldn't totally cross off nursing. Ken gets grossed out by our kids injuries (he has even gotten a bit light headed before) but is hardly phased by the stuff he sees in the ER (which is much worse in my opinion). Crazy I know.

oh :( poor poor little guy! what a blessing that you were able to get him in quickly! hope it gets better soon. Don't totally give up on your dreams, it's harder with your own children :)

OH WOW!!! So how has it been going. That was so nice you were able to get in and out like that!

As for nursing school. I am sure you would be fine. It is infantesimly harder to deal with things when they are happening to your family.