This year Cameron rode in the 1000 Warriors bike race to help him train for Lotoja. Friday night we drove up to Park City to pick up his race packet and go to the spaghetti dinner put on for the riders and their families. It happened to take place in one of the buildings at the bottom of the Alpine Slide and so of course after we finished eating we had to take advantage!
I thought for sure that the kids would be nervous about the chair lift and maybe even the slide, but they both did great. Livvy rode with me and Caleb rode with Cameron. It was a gorgeous evening - perfect temperature - happy kids - and a lot of fun! 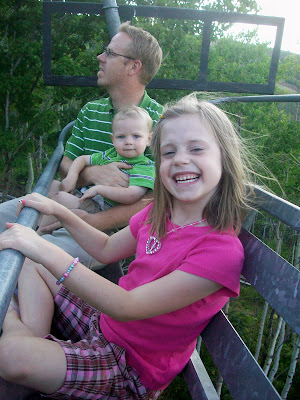 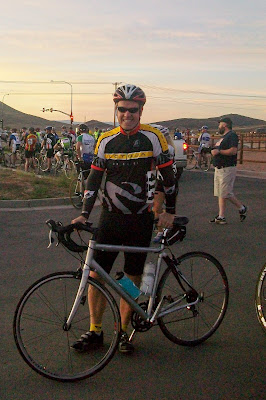 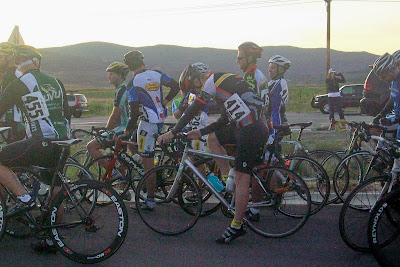 The course was insane - 98 miles up and down mountains, beginning in Park City, circling Jordanelle and the surrounding towns, through Midway, up past Sundance, over the Alpine loop, down American Fork canyon, up over Suncrest and ending at Snowbird up Little Cottonwood canyon. 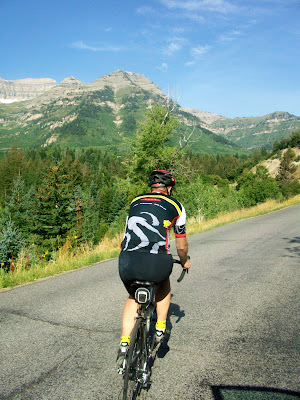 After this picture was taken at Sundance he started getting sick. Ride a little, throw up a little, ride a little, throw up a little... etc etc etc until he couldn't even hold down water.
He managed to make it down the canyon without passing out and crashing his bike, where I was waiting for him at one of the support stops in Highland (just before the Suncrest climb.)
After watching him upchuck goldfish crackers and water all over someone's front lawn I decided that I preferred my husband in one piece and fully supported him in riding "only" 68 miles instead of the full 98. I chucked his bike in the trunk and took him home to recover.
Of course he beat himself up about it all weekend. But don't worry Cameron, in three more weeks you can make up for it by riding two hundred miles!
Lotoja here we come!!!
Posted by BensonFam at 12:21 PM

Oh that would be awful to be so sick! I hope he feels better with lotoja! Good luck!

Oh my goodness! That is crazy! Crazy that he would sign up for those things and crazy that he can actually ride that far (when he's not sick :)). Go Cameron!

holy cow! Go Cameron! The Lotoja is so awesome, I remember working at it.