The very first date Cameron and I went on was a hike up Twin Peaks. (Talk about a leap of faith, taking a near stranger on a ten hour first date... Luckily we ended up getting along!) Shortly after that he taught me how to rock climb. And for the next seven weeks we spent every spare minute between summer classes and jobs, up Big or Little Cottonwood Canyon hiking or rock climbing.
Enter engagement. Then wedding planning and work and a full fall semester for us both. Winter time, wedding, full time school, Olivia, move to Arizona, Caleb...
My point is that it's been about seven years since we've been climbing and OH how we have missed it!!!
A few weeks ago we decided that it was time for our hiatus to end and we took the kids and my sister Andrea to a little beginner spot up the canyon called "Dogwood." 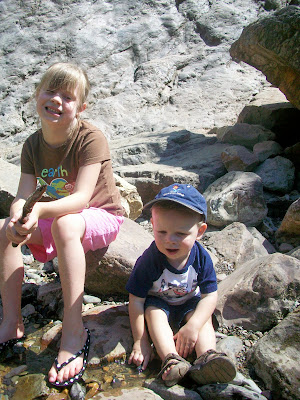 Andy and Cameron set up and each took a turn repelling and climbing the wall while the kids and I had a grand time splashing in the river. 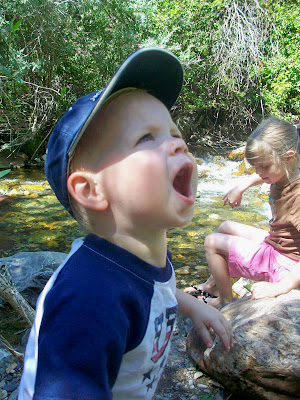 Caleb's look of amazement when he saw his dad on the very top of the wall letting down the rope. 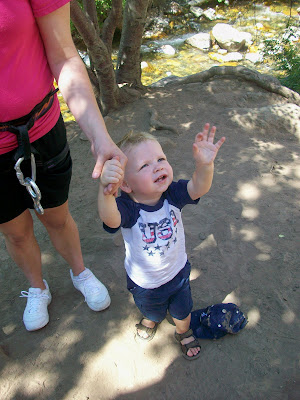 His look changed from excitement to concern when Cameron talked me into taking a turn. 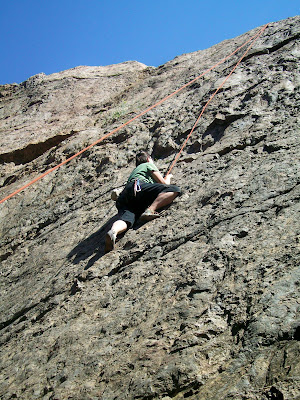 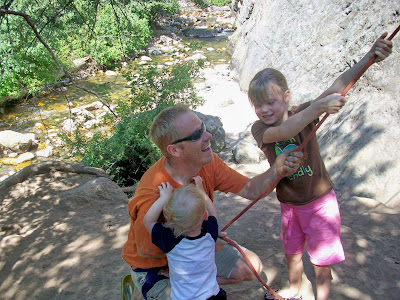 Olivia decided that climbing was super cool, but not for her (you should have seen the look on her face when Cameron suggested she take a little turn.)
And Caleb just shrieked his head off until I was safely on the ground again.
But I had a blast! I think it's kind of cool that something Cameron and I enjoyed doing when we first met has now become a family hobby.
Posted by BensonFam at 6:58 PM

Way to go! I am very impressed. The one time I attempted to rock climb I was so sore the next day I couldn't get out of bed!

Wow! You're superwoman! I'd be so chicken...the older I get the more afraid of heights I am.

You are super brave, I think I would wet my pants doing something like that! AHHHHHHHH!

I love the new background too!

Wade and I love climbing too. Let's plan a day to do it together. Want to come to Maple Canyon? It's the best!

I have a few questions? Did Cam use a rope when scaling the wall? And if so, how did you convince him to use one. He used to refuse to use a rope on that wall.