We had a whirlwind weekend at the Benson house. I'll start with the good stuff. A few weeks ago I got an advertisement and discount coupon in one of those community mailers for 'Disney Princesses on Ice - Princess Wishes.' Olivia had never been to anything like it before, but it sounded so fun and I figured she was overdue for a super cool date with mommy after all of her fabulous big sistering over the past few months. I went ahead and got tickets and Saturday night was the night! Her Grandma Carol and cousin Emy came with us and we made a night of it. 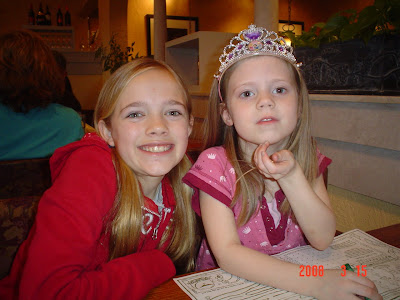 Dinner at the Olive Garden (you can't go to a princess show without a princess crown and of course it had to come along to dinner as well.) 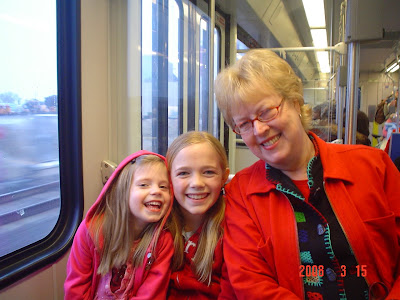 Riding the Trax train downtown. She'd never been on it before and thought that it was soooo fun! I just got motion sick. (I guess public transportation loses its coolness when you've used it a few times.) 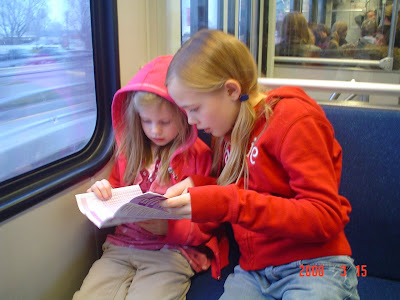 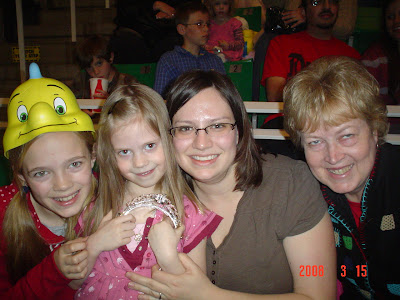 Emy, Olivia, me and Carol 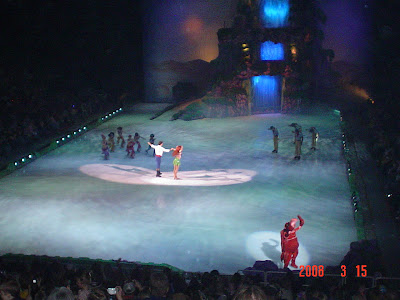 There were seven different sections to the show, each showcasing a different princess and what her wish was. Ariel was one of Livvy's favorites (I'm dreading the year she wants to be the Little Mermaid for Halloween and we have to have the seashell argument.) This isn't the greatest of pictures, but it took me awhile into the show to even get my camera to take a decent picture. 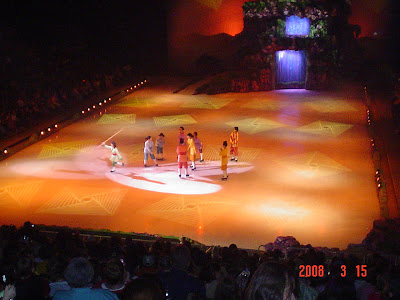 Mulan was Olivia's MOST FAVORITE! 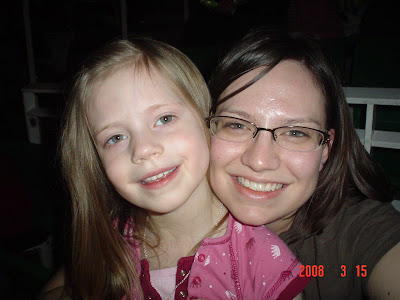 Yay for our fun mommy/Livvy date! 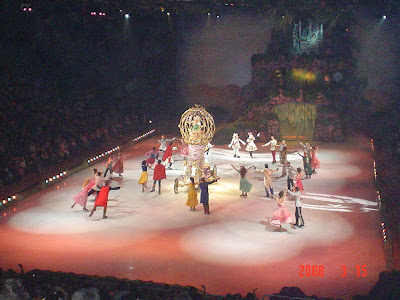 What a fun night! We took Trax back to the car and then drove the rest of the way home. Of course she was asleep two minutes after I buckled her in, but still clutching her princess bag in one hand with the souvenir she chose, the program in her other hand, and the crown still on her head. I'm so glad that we went and I got to have that good time with Olivia (especially after what we put her through for the next few days.) I had been nervous about going, because Caleb had been sick for a few days and tested positive for RSV on Thursday, but he seemed like he was doing okay and my mom and sister watched him at our house until Cameron could get home from work.

End fun part of weekend. Here's the crazy stuff. Caleb did not do great while we were gone - over the course of the five hours we were gone he barely drank a four ounce bottle and he was feverish and fussy. He didn't sleep well that night and only ate a little the next morning so Sunday afternoon we took him into the pediatricians. Long story short: we ended up in the ER at Primary Children's Hospital that afternoon and checked into the infant wing by evening. My poor sweet little Caleb! His oxygen was low and he was dehydrated, so those two tubes along with all of the cords for the different monitors made for a very tangled up, hard to snuggle, distraught little boy. Which made for a very distraught mommy! They'd have to come in every few hours and deep suction all of the mucus out of him so he could breathe and eat. With all of the noise and lights and the nurses rounding every two hours, neither one of us slept great or very much, but he really did improve quickly (and when they weren't poking and prodding at him he was a pretty happy little guy - the nurses all fell in love with him when he'd start to smile and coo at them.) They took him off the IV by Monday afternoon and off the oxygen by Monday evening. They were able to stop deep suctioning (thank goodness!) by early Tuesday morning and just use the bulb syringe, and by Tuesday night we were home. HOME!!!!!!!!!! I've never loved it so much!!!!!!! I feel like our little family was just windblown in three different directions with Caleb and I at the hospital and Olivia staying with my parents and Cameron running from the hospital, to Livvy, to home and to work. Last night, having dinner together and snuggling together before the kids went to bed was just the best feeling ever!

Posted by BensonFam at 8:31 AM

Oh my! Poor Caleb! What a crazy past few days you guys have had. I'm glad Caleb is doing so much better. What a fun evening you had with Olivia! Emma would LOVE something like that!

Ahhh! Why didn't you call me!? Do you need anything? How are you hanging in there? So sorry babe!

Oh Em, Iam gald Caleb is home and doing much better. That is scary. Looks like Olivia had a great time.

How fun for you guys! My girls would love that show. Maggie was Ariel for Halloween 2 years ago. I made her costume, and made the seashells way too big--it actually looked really funny! It was fun to see pics of Carol and Emily.--You'll have to tell Carol I said Hello!

Yeah for a fun mommy/livvy date! and I am very proud of you for posting pictures of yourself!!
But poor caleb! I can't believe you had to stay in the hospital with him! I would have been such a worried momma! Is he doing better! Call me!

Wow! What highs and lows! The pictures of your date with Livvy are precious! What fun memories! What a scare with Caleb! Hope he continues on the mend! Thanks for your sweet comment! You're a doll!

I was getting dinner with a friend at "The Garden" Restaurant in the Smith building and a bunch of these little girls came all dressed up like princesses. It was so cute. They told us that they had just been to the Disney on Ice thingy.

Oh my gosh, I am so glad that Caleb is ok! That is so hard. Poor little guy. It is so hard to see your kid going through something and there really isn't a whole lot you can do.

The Disney on Ice looked so much fun! I can't wait till Kylin is old enough to go to things like that with me.

Wow! Your date looks like it was tons of fun. What a great idea. I'm so sorry about Caleb. That is really scary. I'm just glad he is doing better and even happier to hear he is home now.