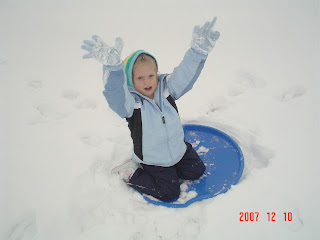 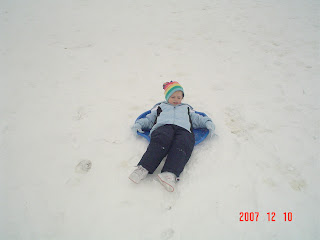 In our part of the valley we sometimes miss out on the really big snowstorms, but luckily we've gotten a few that have allowed Olivia to finally go sledding. She's been so excited to try out this great hill in our neighborhood, and so a few weeks ago after a really nice storm we bought a few saucer sleds and Cameron took her out. She lasted longer than I thought she would and had a fantastic time. 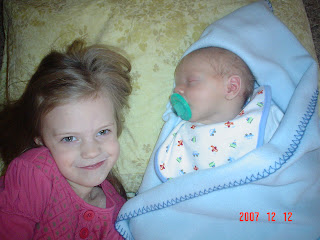 On a totally unrelated sidenote: Livvy was watching tv at her grandparent's house on Christmas when I heard her yelling "Mom! Hurry! Come quick!" I dashed down the hall to find, not an emergency, but her nose pressed up against the television screen, totally mesmerized by a "light brights" commercial. (Do all of you 80's children remember those?) "Mom! I WANT those!" I told her she had to wait until there weren't any babies in our house because the pieces are too small. I thought she'd forgotten all about it until a few nights ago when I was tucking her in. She's been telling me lately that when Caleb grows up she's going to need a little sister next, but as I was tucking her in she says "Mom - we'd better not have any more babies after Caleb grows up, because I REALLY WANT those light bright thingies!" Ah the priorities of a four year old...
Posted by BensonFam at 1:09 PM

Haha. She wants a lightbrite that bad, huh? So funny! Beth has been telling me that she wants another brother...

Olivia is too funny and your little man is so cute. Looks like you guys had fun in the snow.